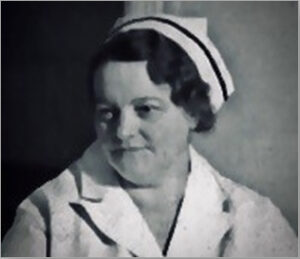 A REMARKABLE REMEDY.   One has to go all the way back in time to the 1890’s for the beginning of the Essiac story – which was when an English woman, who had journeyed by ship to Canada, suddenly faced a difficult dilemma.  She’d developed a sizeable malignant tumor on her breast but did not have the money to pay for the surgery recommended to remove it.

So, she took the advice of an old Native American Shaman who showed her how to brew an herbal tea (decoction) that could cure her.  The shaman instructed her to boil a combination of local herbs in just the right amounts  for just the right length of time and he told her to drink the resulting  “tea” twice a day.  This, indeed, completely cured the English woman’s breast cancer and word later spread throughout Canada with the help of one particular Canadian nurse named Rene Caisse, who became interested in the remarkable remedy in the 1930’s. 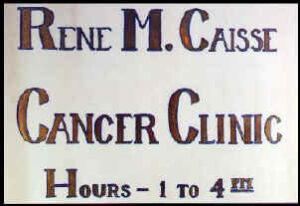 The herbal treatment came to be known as “Essiac Tea” and, over the next hundred years, it cured or greatly helped tens of thousands of cancer patients — including countless individuals who were told by their doctor that nothing else could be done for them.

Essiac is still sold in many different countries and continues to be used by people with cancer all over the world.  Here is what Nurse Caisse’s first cancer clinic sign looked like in the 1930’s.

It is worth noting that Essiac started out as a treatment for people long before it was used  on animals.  This is the opposite of most medical treatments today that start out being given to laboratory animals first to see if the treatment might prove effective for humans.  Essiac never needed to be proven in the laboratory because it had already been working well for people with cancer since the early 1900s. Thus, Essiac took a “reverse path,” so-to-speak, in that its success with humans eventually convinced pet owners to use it on their animals.

One case from the book that exemplifies this reverse path quite well is the story of a majestic dog named Buck.  (See Chapter 3 of Outsmart Your Pet’s Cancer.)  At one point, I asked Buck’s owners how they heard about Essiac and why they decided to use it on their dog.  The wife said, quite matter-of-factly, that they tried Essiac on their dog because Essiac had cured her husband years before of Stage IV Pancreatic cancer!

One veterinarian’s endorsement of Essiac for pets:

“I have personally observed the powerful healing effect of Essiac on cancer and other chronic conditions in animals.
Dogs and cats, in particular, often respond quickly and profoundly.” − Dr. George F. Lent, DVM

Lulu –  “Lulu’s prognosis was that she would only live 6 months at best with no treatment.  But after 4 months on Essiac Tea and [one other supplement], her ultrasound was clear and her cancer never came back.  That was 3 years ago.”

Moe – “The  vet said Moe’s cancer was inoperable and he would probably not live more than 3 more weeks.  He was so weak, he could not lift his head off the floor most of the time.  As each day went by though on Essiac, Moe improved a little.  So the euthanasia appointment was cancelled.  Pretty soon, Moe was running around and enjoying life again!”

Lacey – “This is amazing . . . I started giving her Essiac and within a month, the tumor was literally melting . . . liquefying, losing blood supply, dying.  Trying to get pictures as it happens!”

Xarius –  It was reported that “The owner’s father, a kind-hearted older gentleman, cries every time he sees Xarius now because she is looking and acting so much like her old self again!”